Martino wrote:Meanwhile, this one gave me a start... !

I have to admit that I'm suprised at the amount of crap I'm seeing on the aerogel. Guess I'm naive I really thought clean room meant clean room.

Scary to think about getting surgery, imagine all the junk that goes into your body

What do you think about this one?

Don't you think it look like a draw of a man? Quite stylised...

Anyone with falling trousers?

I found the missing belt Mark of the Reaper?

Go all the way down to the third focus bar from the bottom and the image will resolve dead center (no pun intended) about 25-50 microns from the top.

http://stardustathome.ssl.berkeley.edu/ ... d=229627V1
Winning isn't everything, but wanting to win is. - Vince Lombardi
Top

they DO exist!
Top

Here is a dust bunny for ya!

Check it out - it's Dino from the Flintstones!

The triangular shape of this one was unusual - it almost looks broken.
(Movie ID 1954220V1) 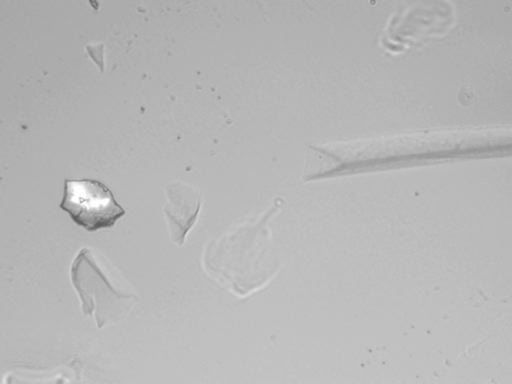 http://stardustathome.ssl.berkeley.edu/ ... =2250395V1
Winning isn't everything, but wanting to win is. - Vince Lombardi
Top

If I could link this calibration movie I saw yesterday I probably would... I should have at least saved the number.

Anyway, you know those movies that have two different sections of gel in them? There was a calibration track going straight through both of them. There's no way it could have even been a real track from a calibration movie... it's like it was photoshopped into place.
Top

This looks strange, kinda like a string of bells:

Lorelei wrote:The triangular shape of this one was unusual - it almost looks broken.
(Movie ID 1954220V1)

Wow, interesting image. It's art work. Here is my interpretation of this painting.

Left to right, a progression of time, from past to future.

The image of the United States really quite clear, including the Mississippi river flowing with water that fell during the 4 billion year blizzard of Cosmic Snowflakes raining down on Earth. The Mississippi river also representing the billions rain drops that fall each year across the United States. Making it green all summer long, contributing to the seasonal reduction of CO2 in the atmosphere, caused by the greening of the Northern Hemisphere.

Above the Snowflake, is a swarm of Stardust. Being much more dense, they are much much smaller and darker that the Snowflake.

The large object in the middle of the frame, represents the impact of a cosmic snowflake in the aerogel. The large water explosion on it surface creating a cloud of steam and surface crater, with a more dense, solid piece of ice penetrating deeper into the aerogel. A clear impact crater and clear track, because it was made with water.

Upper right, a future cloud, with the first rain drop yet to fall. A rain drop falling on a man made mountain range, triangular shaped and stretching the entire length of a continent. Built across the the continent of Australia to force the air up, forming the cloud and making it rain. Turning Australia and the Southern Hemisphere green in the summertime. Creating two seasonal drops in the atmospheric CO2 levels. Terraforming with intelligence, rather than ignorance.

Of course, being somewhat abstract, I'm sure everyone sees something different in the artwork and the future.
Courtesy E-Mail Welcome @ WeBeGood@GMail.Com
Top

No stardust so far, but maybe the first view on extraterrestrial life!
(kind of flea?)